Situated on a former industrial site along Seattle’s waterfront, Olympic Sculpture Park consists of a series of dramatic angular surfaces that rise from the shoreline toward the urban center, bridging both a busy street and a railroad. A variety of sculptures accentuate the landscape, which ranges from open lawns to wooded slopes.

The park, which is part of the Seattle Art Museum, was completed in 2007.

While attending an outdoor concert at the North Carolina Museum of Art in the late 1990s, I remember feeling curious about a seemingly odd series of large shapes in various materials lined up between the museum building and the amphitheater. I also wondered about the geometric forms protruding from the stage in strange directions, and a gray-painted rectangle superimposed on part of theater seating area. I never closely investigated the objects, being more interested in the musical entertainment at that time. Then I happened to see an aerial image of the site, discovering that the shapes are actually letters spelling “Picture This”— clever, but really only when viewed from above. I later learned that some of the letters include phrases that reference the history, culture, and landscape of North Carolina – at least that is something to be gained when viewing the objects at ground level, where most people see them.

“Picture This”, a sculptural installation at the North Carolina Museum of Art

In my opinion, for art to successfully function as part of the landscape of a public space, it not only needs to be comprehensible from eye level; it also should communicate well with its surroundings. Furthermore, the design should include a sufficient amount of elements at human scale (such as seating and planted areas), especially when a plan includes vast expanses of pavement. In recent years, various blogs I’ve followed have included striking images of public landscapes with interesting flowing forms, geometric lines and shapes, and bright colors. Many of these photos, however, were taken from above. For some projects, aerial images were the only ones included, which makes me wonder whether these spaces truly work: Are they comfortable and inviting places? Do people tend to linger in these settings, or are they devoid of much activity?

One such project that intrigues me is the seafront promenade in Benidorm, Spain, probably because of its rainbow of pavement colors and curvy walls which mimic ocean waves. I haven’t visited this beach, so I couldn’t say whether it succeeds as a public space, but I like how each color lends some identity to every section of this extensive walkway, instead of repeating the same pattern and/or colors along its entire length. I think that certain unifying elements are important throughout any type of site design; but long, linear spaces should include some variety as well, to avoid creating a monotonous experience along these corridors.

For comparison, in another part of Spain, a median promenade along the Avenida de Portugal, in Madrid, includes large flower motifs throughout its length, referencing a valley in the region known for its cherry blossoms. The median is actually the roof of a highway tunnel, and the image below only shows one portion of this walkway. I’m curious to know whether this space is well-used.

The following aerial images include a few more public spaces which are fascinating and attractive when viewed in two dimensions. Some of these and others that I’ve seen in photos from above make me think of abstract paintings or fiber art works. Do they function well in 3-D at human level? I will reserve judgment until and unless I have the chance to experience them in person. (Even photos taken from the ground don’t often give me a sense of how a space feels.) If any of my readers have been to these or other sites with an emphasis on artistic forms, I would love to hear some comments. 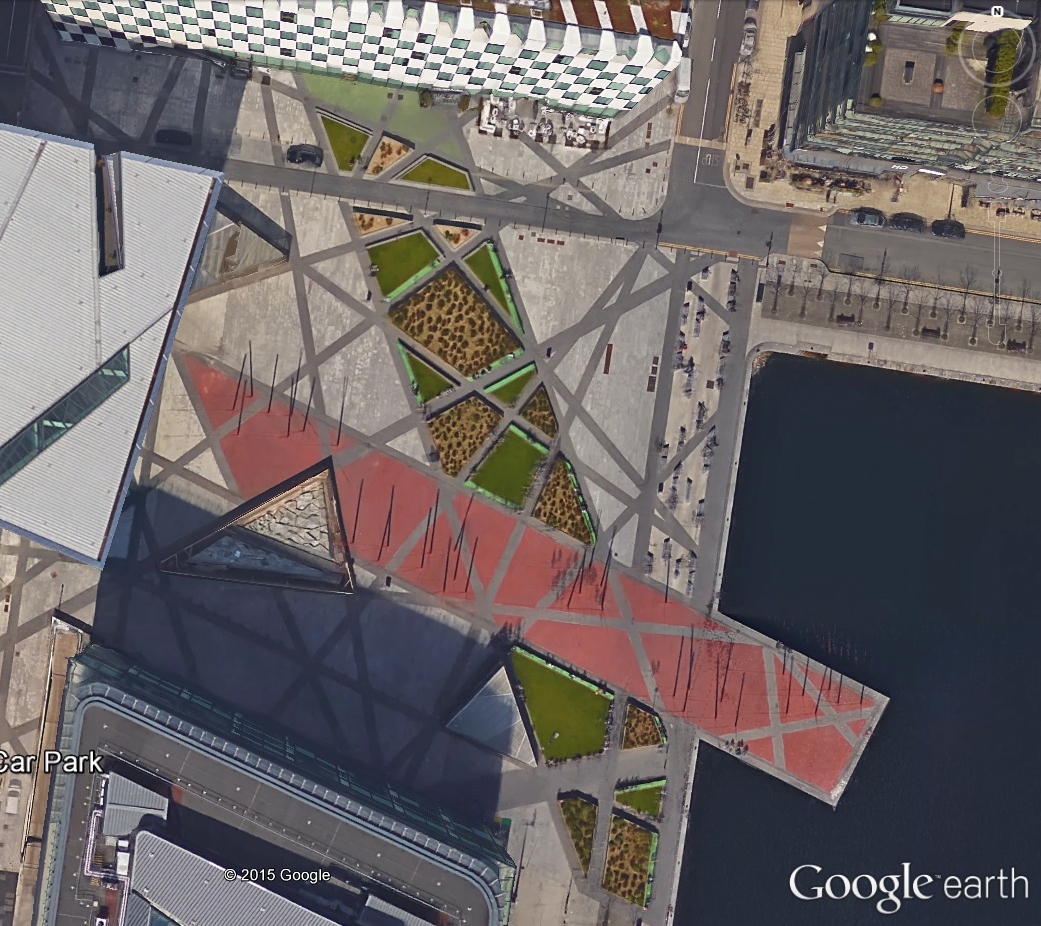 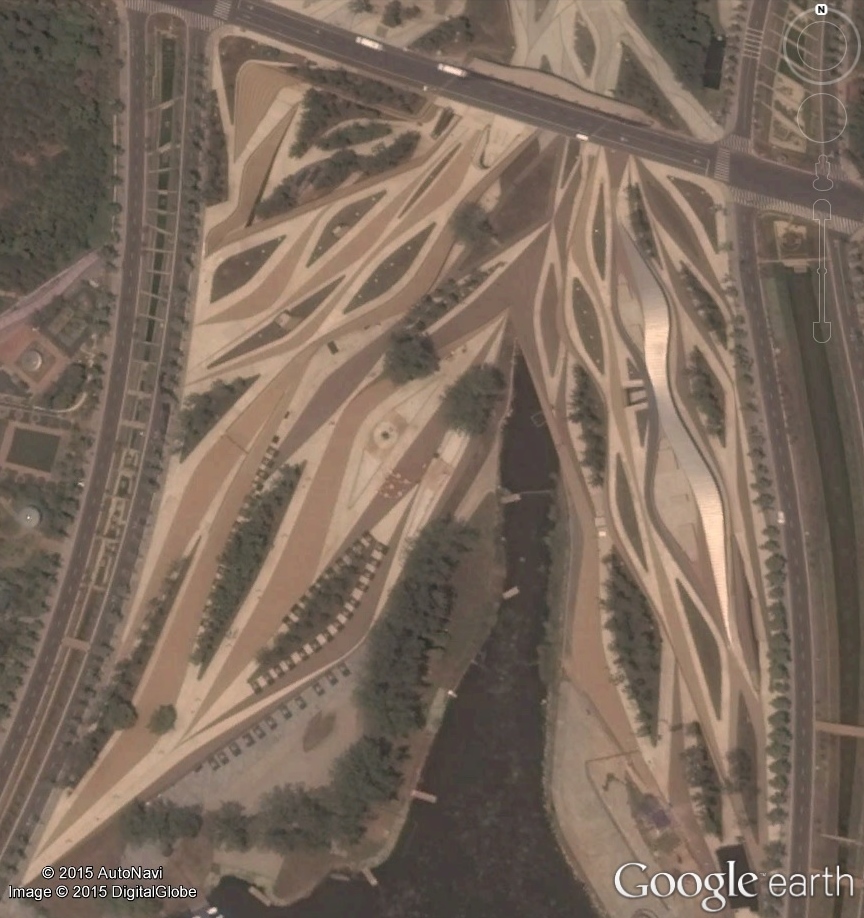 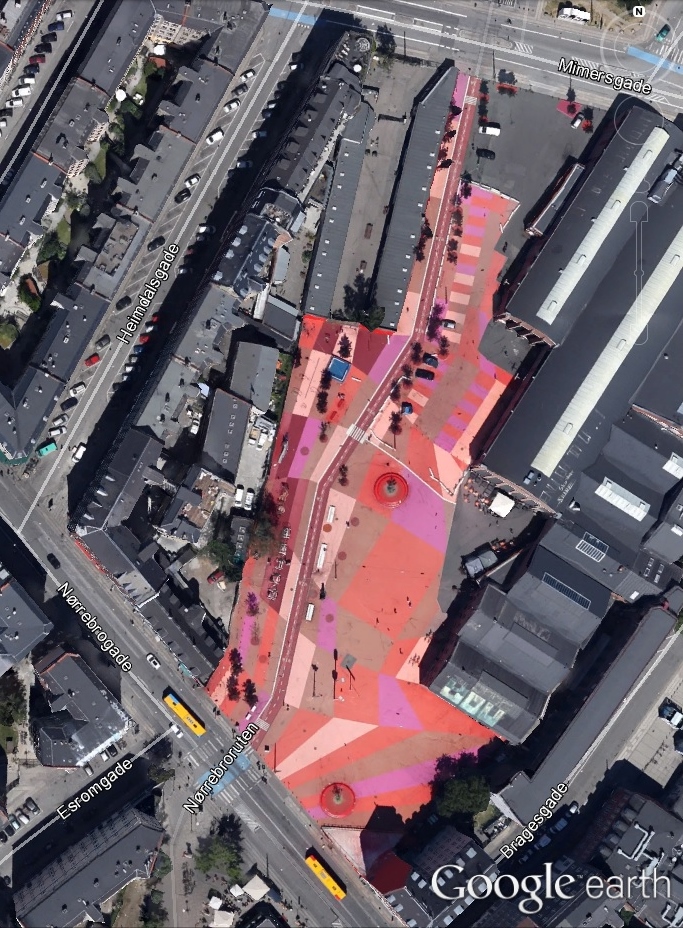 All images obtained from Google Earth.