On a chilly, windy Sunday back in late March, I walked the majority of the Rose Kennedy Greenway while visiting Boston. I found that most areas were devoid of visitors, except for the North End Parks and the southern-most tip at the Chinatown gate (which always seems to have activity). The two North End parcels (divided by a cross street) include a spacious steel pergola running along the east perimeter, facing a lawn and linear water play areas. I imagine that these spaces attract big crowds in summer, judging from the amount of use they got on the cold day I visited. The parks feel quite connected to the city, with views in all directions of downtown and north end buildings, as well as the iconic Zakim bridge. However, ample plantings and some grade separations help to segregate these spaces comfortably from the busy perimeter streets.

All the swinging benches in the pergolas were occupied at the time – unfortunately, I’ve heard that they’ve been removed due to maintenance/safety issues, and replaced with standard benches (which were there before). 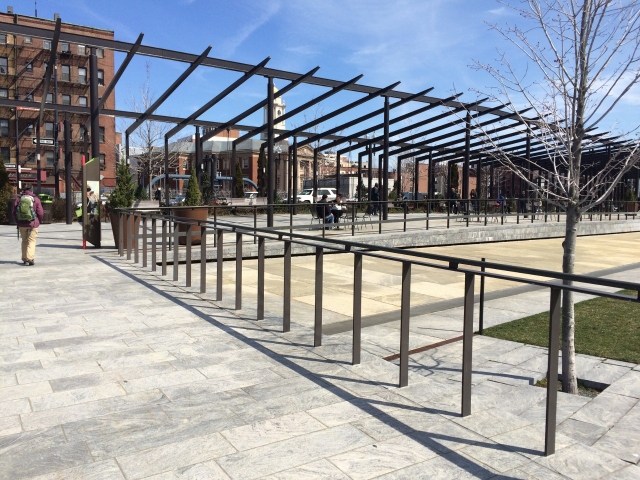 The Rose Fitzgerald Kennedy Greenway is a 15-acre linear urban space in downtown Boston, sited on land where Interstate 93 was previously located (now in a tunnel below). The greenway has been criticized for not being designed cohesively; however, the space should instead be considered as a series of disparate urban parks, each with its own merits.

One of the better-conceived spaces along this route is Chinatown Park, located at the southern end of the greenway. It was designed by Carol R. Johnson Associates, a Boston-based landscape architecture firm. The park is approximately three-quarter acre in size, and includes a curvilinear path with red sculptural features, a waterfall fountain and stream, plants native to Asia, and a plaza for festivals and other activities. China’s culture, history, and natural scenery are all represented by the park’s elements.

This bold, modern gate at the north entrance of the park is a counterpoint to the ornate, traditional Chinese gate to the south (shown in later photo). Red is a very popular color in China, representing good fortune and joy. 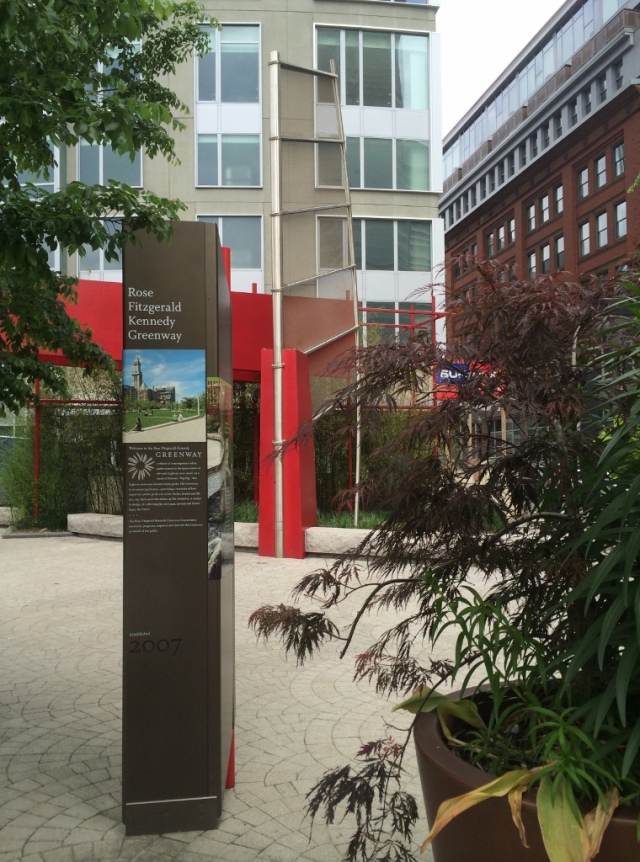 North park entrance – The sculpture in background is entitled “Zheng He’s Mizzen Sail”. The park’s pavement pattern symbolizes the scales of a dragon.

The waterfall fountain is composed of reclaimed seawall stones, acquired from a part of the Boston Harbor where many Chinese immigrants arrived.

The park includes Peonies and many other plants of Asian origin.

Plaza at southern end of park

The traditional Chinese gate can be seen at the south end of the plaza.